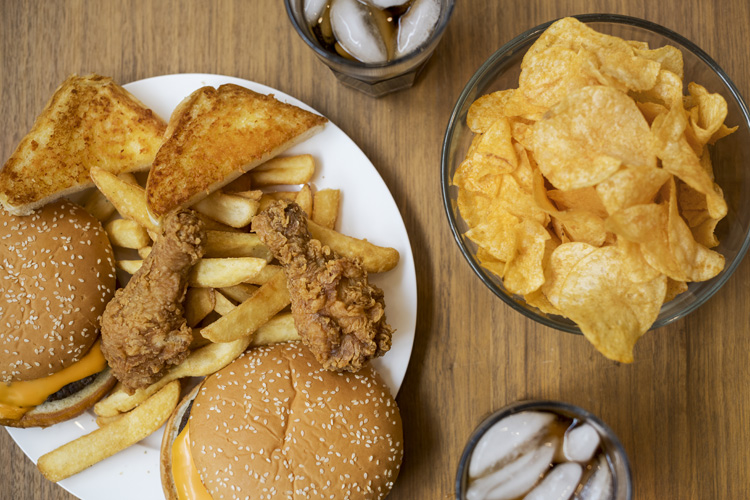 It is essential that you choose wisely when it comes to your food intake. Other than impacting your digestion, your body weight and most importantly your fitness routines, the food you consume can have severe implications on your cognitive abilities. It may put you at the risk of serious brain diseases including dementia and Alzheimer’s.

Here are some regular food items that you should avoid taking for a healthy brain life:

The very first item on our list and our all-time favorite – fried and fast food. Yes, we are all guilty of indulging in this unhealthy food habit. These food items are rich in fat and calories and beyond their implications on physical health, they are definitely a threat to your brain. They lead to inflammation in the brain and cause memory loss and brain fog.

What to do otherwise? Choose Baked! Eat grilled meats and veggies – all baked!

Except for that sweet flavor and a sugar rush, there’s nothing nice about sugary drinks. It just extra calories in your body. Anything sugary including sodas, energy drinks and sports drinks is a source of added calorie count and brain diseases. A 2017 study linked daily soda consumption with dementia.

Alcohol is no exception either. It is true that research suggests that a glass of wine can have positive health impacts, however, extra intake of wine can result in lower cognitive function and poor brain health.

What’s healthy? Simply increase your water intake. If that’s not what appeals to your taste buds, then just add a punch of fruit flavor to your fluid intake.

Many consider fish as good food for the brain. But not all fish is good, especially fish rich in mercury. This includes canned albacore tuna and other varieties of tuna, escolar, king mackerel and shark to name a few. Mercury is largely found in oceans where fish absorb it with their gills. This element can have negative impacts on cognitive functioning.

Talk to a food and safety agency to learn about fish with high content of mercury.

Before we begin to talk about meats in general, it is important to bring up the negative impacts of too much red meat. Study has revealed a link between high consumption of red meat and increased cases of Alzheimer’s.

Another reason why red meat is harmful is because of rich iron content. Too much iron can increase oxidative damage, which results in cell deterioration and more importantly brain damage.

Packaged meats including the mouth-watering bacon, deli meat and hot dogs contain added preservatives, sodium and sugars. These can prove to be very harmful to our bodies, particularly our brains.

Remedy? Reduce the intake of packaged meats and look for nitrate-free bacon.

If you believed that saturated fat was only a component of fast food, then you should know that the food you consider healthy also contains the same. High-fat dairy products such as cheese (shredded, sliced and processed cheese) and some yogurts also contain saturated fats.

Processed cheese builds protein in your body, which studies suggest is linked to Alzheimer’s.

Another myth presents margarine as a healthier option over butter. But the truth is that margarine is as bad as butter for your brain health, due to the presence of protein beta-amyloid, which is responsible for Alzheimer’s.

Don’t look hard, they’re right there, all around you. Yes! Cereal, rice, pasta and white bread. They’re bad for your health because they get absorbed into your bloodstream very quickly, resulting in high blood sugar. There’s a proven correlation between blood sugar and brain health.

Wheat carbs are a better choice than refined carbs, so choose wheat- rice, bread, pasta or whatever white to reduce the damage.

Vegetable oils are the most used kitchen item and are considered healthier than butter. Well, that’s not true, in fact they are rich in Omega-6 which leads to brain inflammation. If you’re wondering what oils come in this category, then here’s your answer – canola, soybean and sunflower.

What to use then?

Oils rich in Omega-3. Olive oil is one of them and is a better alternative for vegetable oil and butter.

Too much salt can be dangerous, leave alone it’s affect on blood pressure. People who consume food rich in sodium are at a high risk of developing dementia or Alzheimer’s.

Avoid such food items. Simply flavor your food with salt tasteful enough to make your dish taste good and accompany it with some spices to enhance the flavor of your foods.

So, now that you know what to eat and not, save that precious brain from the unknowing damage you’ve been causing it. Meanwhile, keep a tab on the calorie count too